Woman of Time: does beauty depend on time or is it likely to last in eternity? 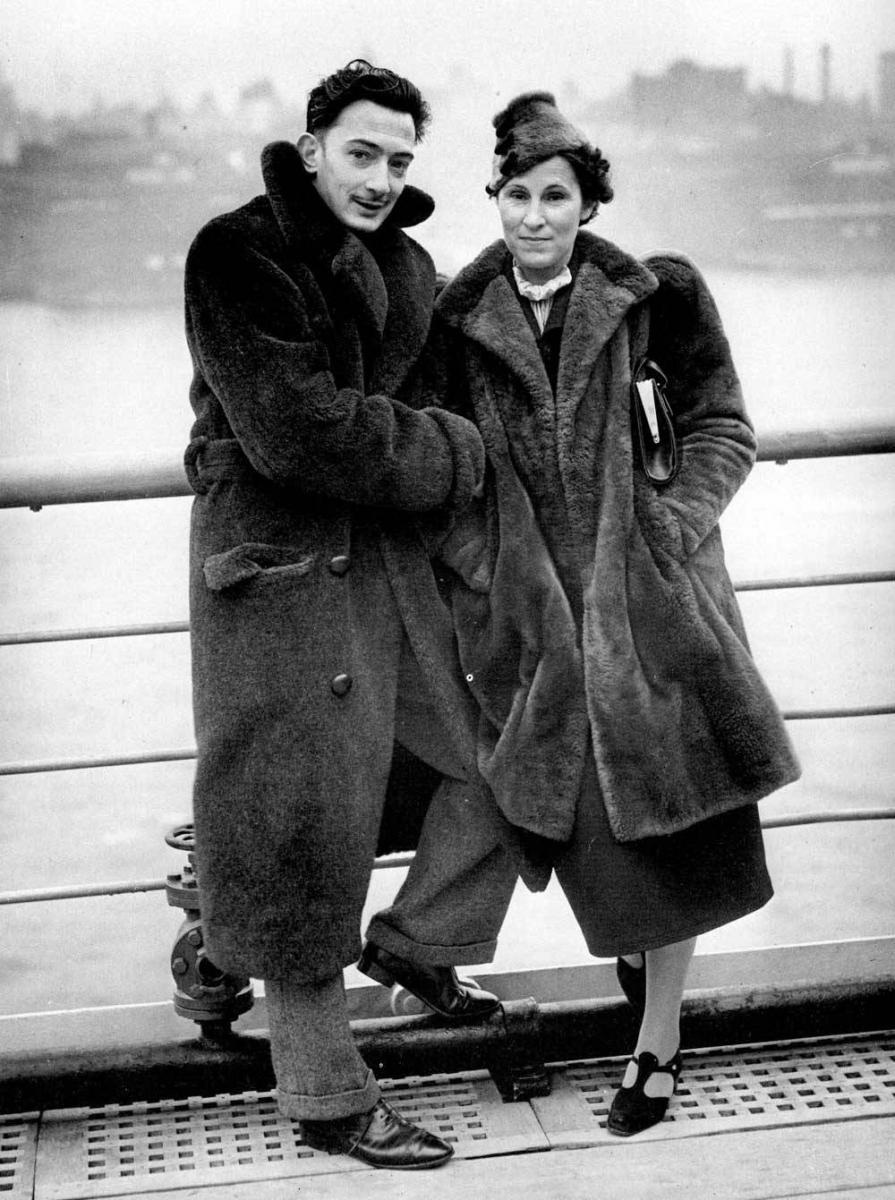 Salvador Dalí came to New York for the first time on 14 November 1934, along with his wife Gala, after crossing the Atlantic on a steam liner, leaving from Le Havre, in France. In the subsequent forty years, Dalí spent the winters in New York, staying at the St. Regis Hotel on the East 55th, where he had a private suite (room 1610) which he also fitted out as a studio. The Catalan artist managed to conquer the city of New York transforming himself into a unique “business model” and “trade mark” destined to last in time.

The famous Statue of Liberty, the symbol of New York and of the Whole United States of America, undoubtedly influenced Salvador Dalí in creating the sculpture Woman of Time, conceived in 1973. 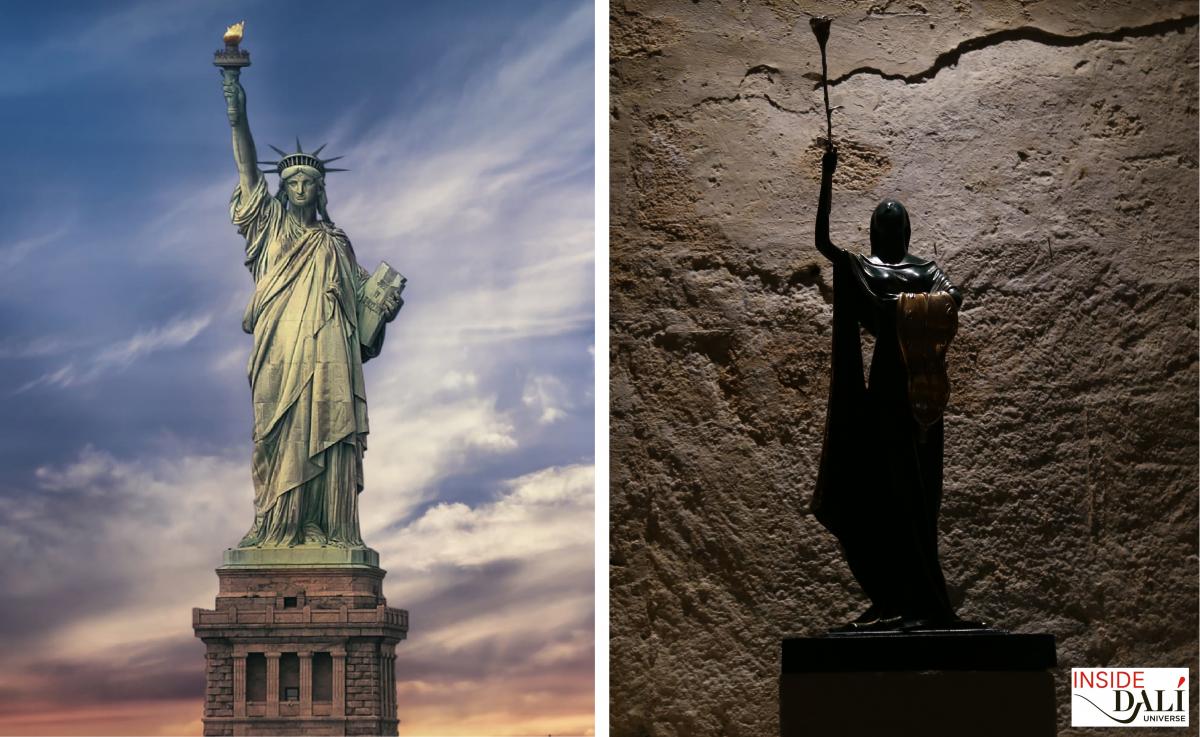 Both the women wear a long dress and proudly raise their right arm with the one showing a flame (the symbol of the eternal fire of liberty) and the other a rose (the symbol of beauty and harmony). The two figures hold an object connected to time in their left hand: a tabula ansata bearing the Independence Day date, 4 July 1776, and a melting watch telling the time 12.30.

The shapes of the Art Nouveau Style have inspired Salvador Dalí’s art and are evident in some paintings like The Font (1930) and The invisible man (1929-1932). Floral elements like acanthus and rose leaves, as well as the gracious and elegant shapes of the figures and of their hairstyles, are the protagonists of these paintings. 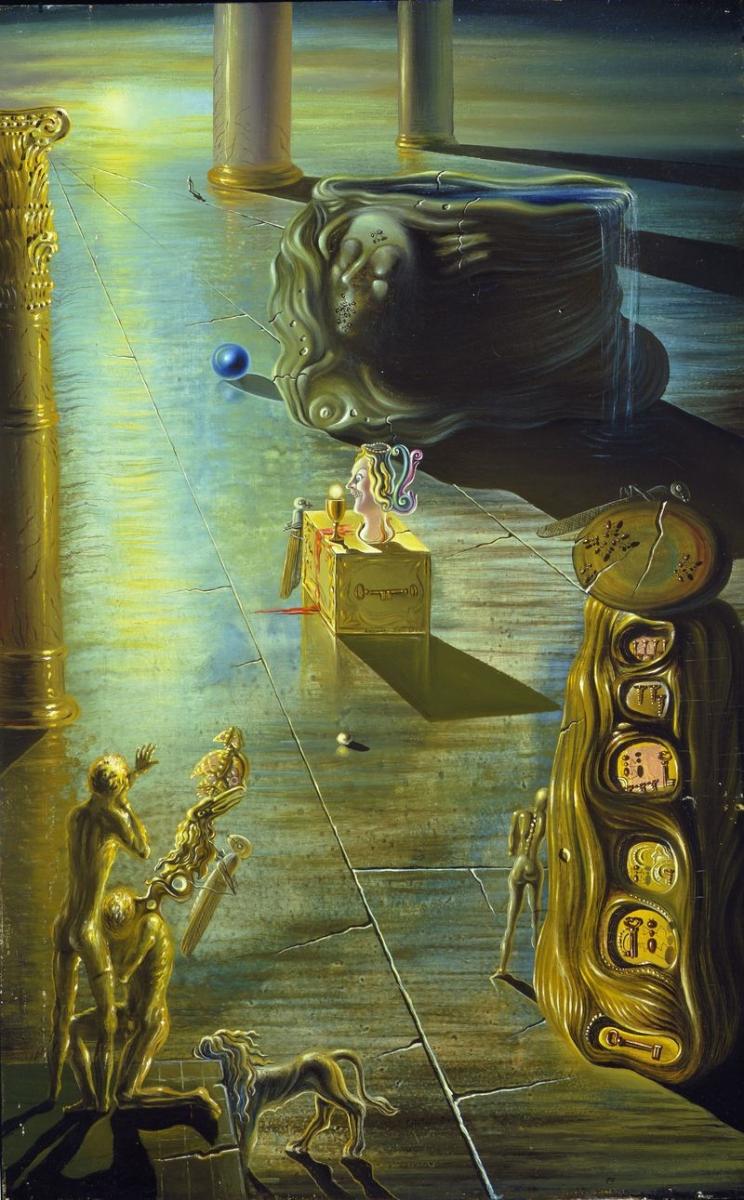 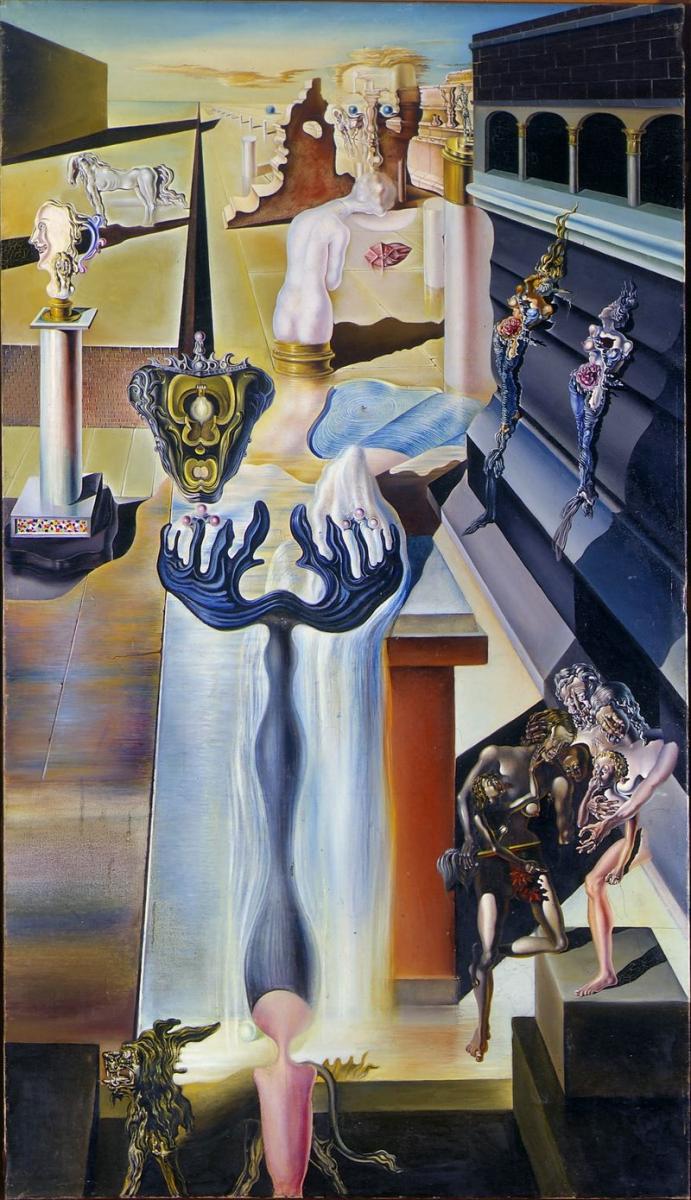 For Dalí, the acanthus leaf is an immortal ornament. In his autobiography The secret life of Salvador Dalí, he wrote: “When, in the beginnings of the history of culture, the men who were to found the eternal bases of Occidental esthetics chose, among the formless multiplicity of existing foliages, the unique and shining outline of the acanthus leaf, they materialized, in so doing, the immortal morphological symbol which was destined to become nothing less than the cosmogonic constant of Greco-Roman civilization, opposing that of Asia and the Orient, the lotus-blossom. The “plant-dream whirl”of the acanthus leaf hardened into the luminous concisions of the first Corinthian capitals, and since then it has not ceased to be the tradition of esthetic intelligence, the continuous force of Minerva through the vicissitudes of blind and obscure forces of history. The acanthus leaf, become divine through the force of the conception of its first ornamental concretions, was destined not to die. It was to live in all the future architectures of the spirit, and while changing the skin of its dreams of growth, it was throughout the convulsive events of the Occident to roll, curl, grow heavy, furl and unfurl, live and live again, sprout and sprout again. Often it would disappear beneath the revolutionary storms, only to reappear more esthetically perfected than before, in the serene calms of the renaissances…”.

In the sculpture Woman of Time, Dalí brought to bronze all the elegance and grace of the artistic and philosophical movement that developed between the end of the 1800’s and the early 1900’s under the name Art Nouveau, known in Italy also as floral style, Liberty style; representing a young graceful woman raising an arm and holding the stem of a rose in her hand, while a melting watch, the iconic Dalinian symbol of time, rests on the other arm.

The elegance and the grace of the Woman of Time are reminiscent of the same elegance and grace of the sculptural groups that adorn the facade and the inside of the Palau de la Música Catalana in Barcelona, particularly the group of girls singing a Catalan ballad. The ceiling of the concert room, rectangular in shape, is rich of floral motifs and amongst them the image of the rose predominates. Dalí visited this splendid architectural example of Catalan modernism, created as the “garden of music”, during his childhood, along with his family.

The position of the female figure of the sculpture Woman of Time is similar to that of the figures painted by Salvador Dalí in the painting Three young surrealist women holding in their arms the skins of an orchestra (1936). In the painting, the two women next to each other both have a head of roses, one raises her hand to the sky the other holds a melting cello, taking on the same shape as the watch in the sculpture Woman of Time. The clock and the cello seem to lose their realistic virtues and are illustrated in their decaying appearances. In both the painting and the bronze, Dalí illustrates the female figures with a dress so long that it even covers their feet. 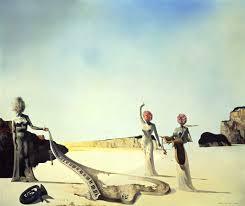 The rose occupies an important place in the Dalinian universe. It appears for the first time in the 1924 Salvador Dalí painting entitled Bunch of flowers and is the subject of many other paintings, among others The bleeding roses (1930), Gradiva (1931), The Virgin of Guadalupe (1958) and The rose (1958). 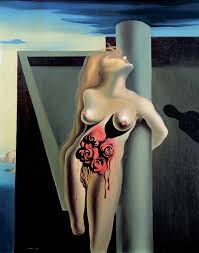 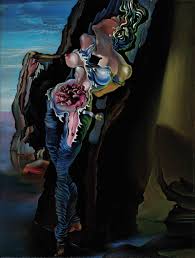 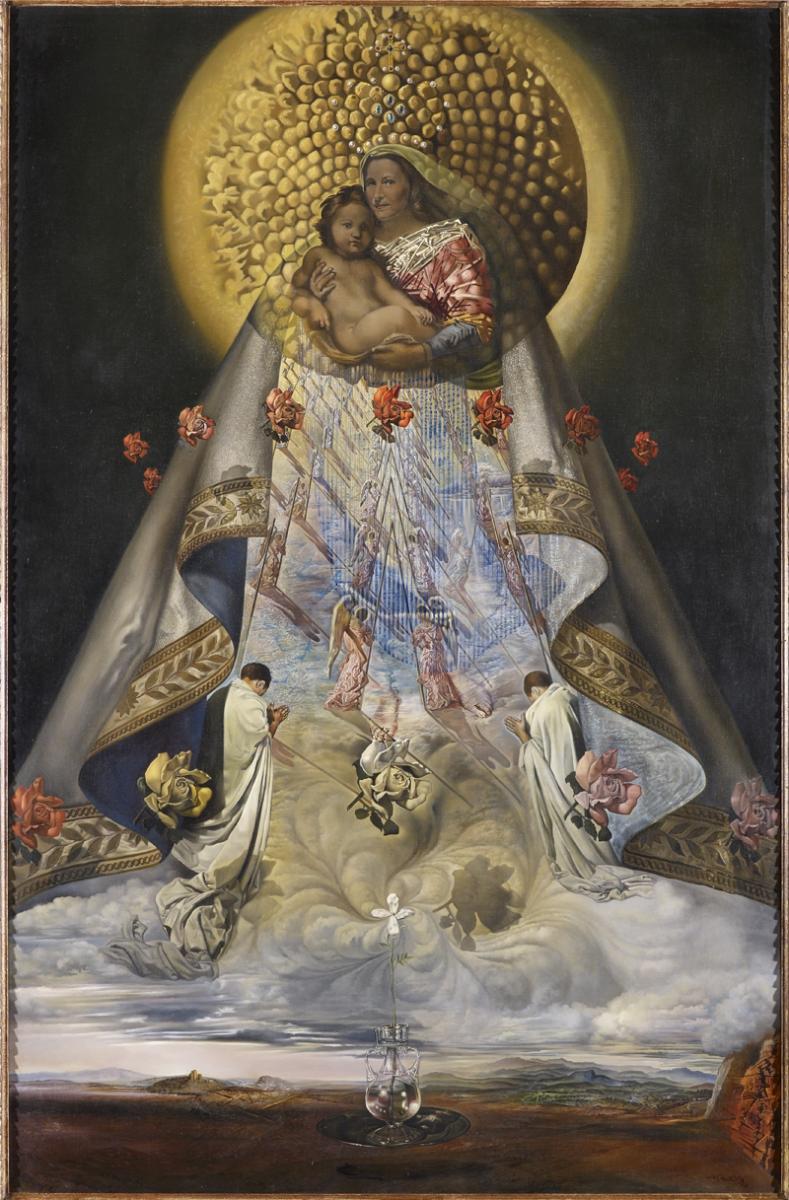 As regards the rose flower, Dalí stated: “Each flower grows in a prison! In the aesthetic point of view freedom is formlessness. It is now known, through recent findings in morphology (glory be to Goethe for having invented this word of incalculable moment, a word that would have appealed to Leonardo!) that most often it is precisely the heterogeneous and anarchistic tendencies offering the greatest complexity of antagonisms that lead to the triumphant reign of the most rigorous hierarchies of form”.

For Dalí “the rosettes have a sort of expansive force, almost an atomic force”. All his life, the Catalan artist had a profound obsession for shapes that converge precisely in a point and are rigorously contained in logarithmic curves.  Studying the morphology of the sunflower, Dalí said: “I discovered that in the junctions of the spirals that form the sunflower there is obviously the perfect curve of the rhinoceros horn”.

The image of the melting watch appears for the first time in Salvador Dalì’s famous 1931 painting The Persistence of Memory, the heart of the collection of the New York Museum of Modern Art (MoMA) since 1934. In the sculpture Woman of Time, Salvador Dalí illustrated the central image of the famous 1931 painting in bronze. In the bronze sculpture Woman of Time it is interesting to note the simultaneous presence of the rose and of the clock. Dalí united and created a strong contrast between the symbolism of the rose and the concept of Dalinian time. 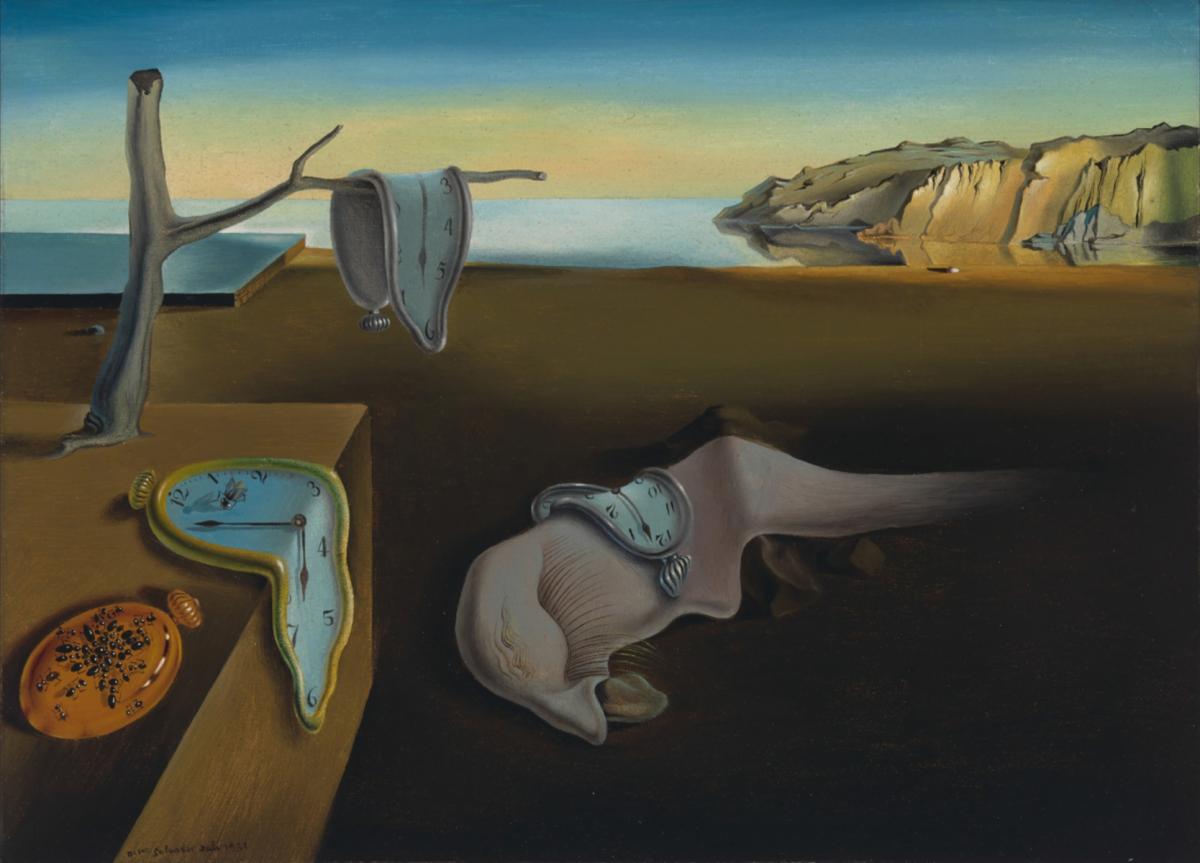 For Dalí: “form is always the product of an inquisitorial process of matter – the specific reaction of matter when subjected to the terrible coercion of space choking it on all sides, pressing and squeezing it out, producing the swellings that burst from its life to the exact limits of the rigorous contours of its own originality of reaction. How many times matter endowed with a too-absolute impulse is annihilated; whereas another bit of matter, which tries to do only what it can and is better adapted to the pleasure of molding itself by contracting in its own way before the tyrannical impact of space, is able to invent its own original form of life”.

With one hand, the Woman of Time offers the spectator a glimpse of the floral lightness and richness of a delicate rose, which presents the complexity of its morphology, imprisoned in rigorous formal hierarchies. On the opposite arm, the female figure has the Dalinian watch and shows the fascinating image of an originally hard and precise matter (the watch), which seems “to do only what it can and is better adapted to the pleasure of molding itself by contracting its own way before the tyrannical impact of space” and acquires a new shape, “is able to invent its own way original form of life”: that of a soft cheese, for Dalí “paranoiac- critical Camembert cheese of space and time”.

“I hate simplicity in all its forms” said Dalí. The sculpture Woman of Time is, in this sense, the elegy to rigour and formal richness, a homage to female grace and beauty, the admiration for Art Nouveau, along with the declaration of a profound concern for the passing of time.

The presence of the melting watch alludes to the awareness that beauty ends with the fading of time. Dalí associated the symbolism connected to female charm to the symbolism of time, fleeting and impossible to control. Perhaps, by resting a watch on the arm of the Woman of Time, Dalí wanted to let us participate in his art and provoke us with a question: does beauty depend on time or is it likely to last in eternity? 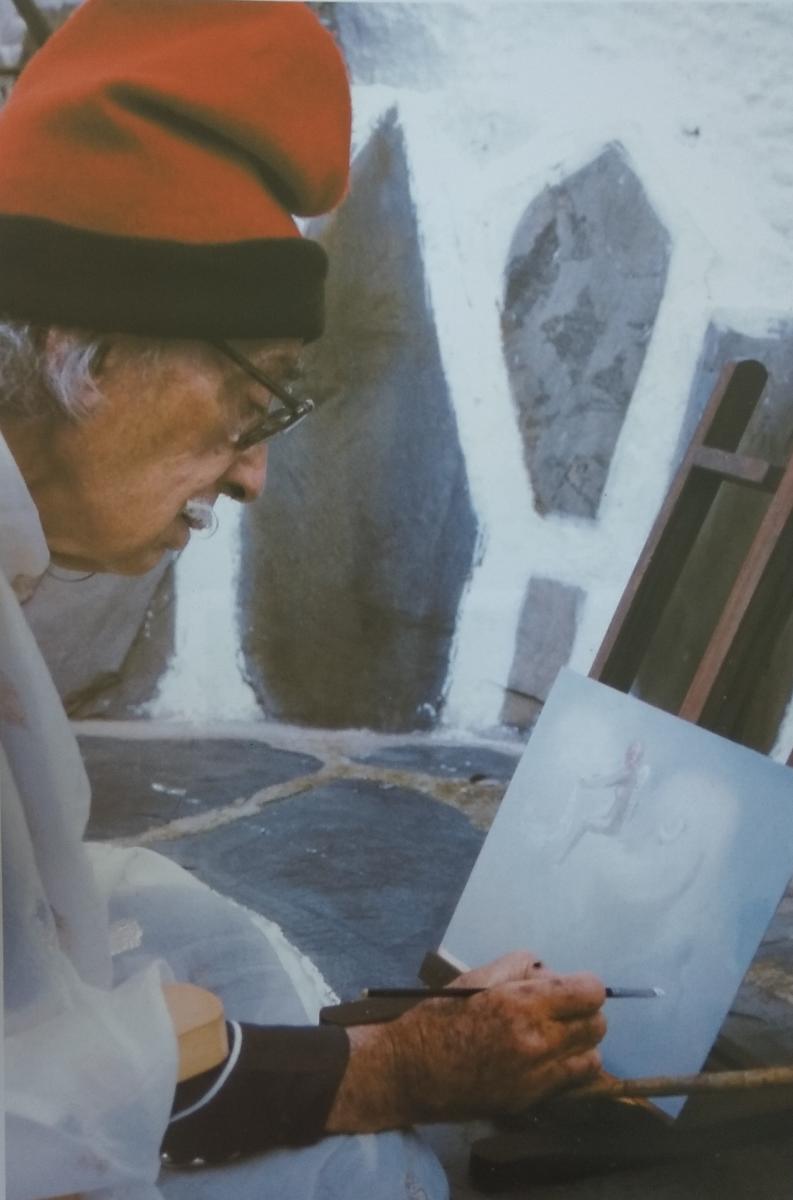 “Wretched was he who, having acquired the supreme science of old age, sold his soul to unwrinkle his brow and recapture the unconscious youth of his fresh!”, wrote Salvador Dalí in his autobiography The secret life of Salvador Dalí: “Let the labyrinth of wrinkles be furrowed in my brow with the red-hot iron of my own life, let my hair whiten and my step become vacillating, on condition that I can save the intelligence of my soul - let my unformed childhood soul, as it ages, assume the rational and esthetic forms of an architecture, let me learn just everything that others cannot teach me, what only life would be capable of marking deeply in my skin!”.