“Palladio and Bramante impressed me more and more as being the startling and perfect achievement of the human spirit in the realm of aesthetics […] From day to day Gala was reviving my faith in myself. I would say: “It is impossible, even astrologically, to learn again, like the ancients, all the vestiges of technique that have disappeared. I no longer have time even to learn how to draw as they did before!”  Salvador Dalí

Dalí was quite clear in declaring his profound admiration of Palladio in his autobiography “The Secret Life of Salvador Dalí” and in “Diary of a Genius”. The Catalan artist described the architect of the Italian Renaissance, and with him Bramante, as being the “startling and perfect achievement of the human spirit in the realm of aesthetics”.

His fascination with Palladian architecture had a great effect on Dalí, who saw in that Renaissance master the products of a “technique now disappeared”, which should be admired, studied, and experimented in order to “return to Classicism” and affirm an “aesthetic faith”, as “the only reply  to the incapacity to observe things, which had devoured the artists of the post-war years”.

Dalí’s first visit to Italy was in the autumn of 1935, desirous to see for himself the works of the Italian Renaissance; but it was only in the autumn of 1948, after years spent entirely in the USA that he was able to stay any length of time in the city of Vicenza, and that year marked the new  “classical phase” of Dalí’s art.

His treatise “50 Secrets of Magic Craftsmanship”, published in New York in 1948 by Dial Press, is a clearly declared celebration of the classical tradition, represented by the most important painters and architects of the Italian Renaissance: Palladio, Bramante, Raphael and Leonardo da Vinci.

During his stay at the Villa Roi in Vicenza, Dalí and Gala were guests of the marquis and patron of art Giuseppe Roi. Dalí visited Palladian architectural works with deep admiration and dedicated himself to the study and analysis at close range the composition and geometry of Andrea Palladio’s architecture.

In his “Diary of a Genius” Dalí wrote “If you refuse to study anatomy, the arts of drawing and perspective, the mathematics of aesthetics, and the science of colour, let me tell you that this more a sign of laziness than genius”.

The first version of the “Madonna of Port Lligat”, which Dalí painted in 1949, was inspired with no doubt by Villa Almerico Capra,  known as “la Rotonda” by Palladio. The seated Virgin Mary has a bowed head, contemplating and adoring the fruit of her womb, Jesus. The architecture surrounding her seems to want to crown her, and is identical in shape as the side arches of the jutting part with open gallery and staircase of the famous Venetian villa, with the only difference that in the painting Dalí decided to represent the structure by decomposing it in various parts and making them fluctuate in the air over the Catalan scenery of Port Lligat. 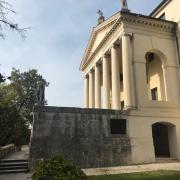 In the same year Dalí painted “Leda atomica” (1949) with the aim of conveying into the pictorial work the humanistic ideals of the Renaissance architecture of Palladio. The painting, as the architecture of the Palladian villa “La Rotonda”, is the fruit of the search for symmetrical and geometrical perfection, which can be entirely inscribed in a perfect circle. 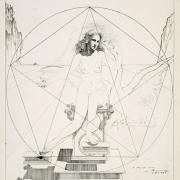 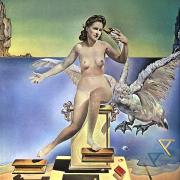 Dalí was so impressed at the wealth of the landscape, culture and art of the city of Vicenza that, in the autumn of 1948, after a month’s stay in town, he decided to prolong his sojourn in the villa of Montegalda. 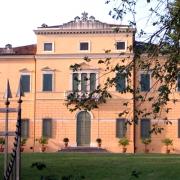 Only three years after the end of World War II and the atom bombings of Hiroshima and Nagasaki, Dalí started up the new “classical phase”, which he had previously announced at the opening of a painting exhibition at the Bignou Gallery of New York in 1945.

The political situation after the war, as well as scientific and technological progress allowed Dalí, as he himself stated, to “embrace the serene perfection of Italian Renaissance painting”. At the same time, Dalí declared: “the more classical I grow in the arrangement subjects, the more irrational and inexplicable subjects themselves become”.

In the autumn and winter of this year, 2019, Vicenza welcomes Salvador Dalí again in spirit by means of the presence of the sculptures of the Catalan genius.

It will be possible to admire in the historic centre of Vicenza some bronze sculptures which are part of the important Dalí Universe Collection of Beniamino Levi: “Space Venus”, “Triumphant Elephant”, “Dalinian Dancer”, “Dance of Time III” and the “Surrealist Piano”. They can all be visited, respectively, walking along Piazza Matteotti, Piazza dei Signori, the Palladian Basilica, Piazza San Lorenzo, and between Corso Palladio and Contrà Cavour. 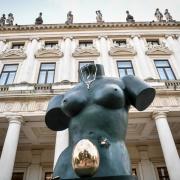 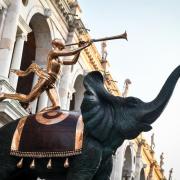 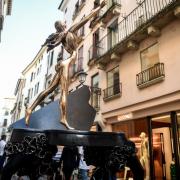 The sculptures “Homage to Terpsichore” and “Dance of Time I” have been moved after the end of the third edition of the VIOFF, the Vicenza Oro Trade Show Fringe Festival, the first to Piazza delle Erbe, and the second to Piazza Esedra di Campo Marzo.

Moreover, those who enter into the evocative areas of the Palladian Basilica, will have the opportunity of meeting Salvador Dalí spiritually in the Jewellery Museum, too, and get to know the many-sided personality of the Catalan master by visiting the exhibition “Arte preziosa. Le sculture gioiello di Salvador Dalí (Precious art. The jewellery sculpture of Salvador Dalí)”. 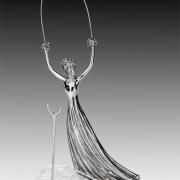 Vicenza will “host” Salvador Dalí by means of the iconographic and material wealth of his works up to 26 January 2020.

It will be an occasion not to be missed to admire Dalí’s sculptures alongside Palladian architecture, in the same historic and artistic context of the city of Vicenza; the city which in 1948 caught the attention of Dalí, and previously, in 1910, had made such an impression on Gabriele D’Annunzio, who called it  “Vicenza la Belle”, “my divine Vicenza”, “my beloved city”.

“The charm of Vicenza is timeless, just like the art of Dalí”, says the President of the Dalí Universe, Mr. Beniamino Levi.

It is not surprising that film producer Samuele Schiavo chose to describe the city, praising her “divine beauty” - as D’Annunzio had it - by means of an exciting video entitled “Vicenza the great”, produced in March 2019.

Nor is it surprising that last September Vicenza was chosen, together with other three Italian locations, to be part of the Chinese TV programme “The most beautiful towns and villages”. Vicenza hosted the CBN China Business Network (CBN), the leading Chinese TV station based in Shanghai, which filmed sites in the historic centre and next to the city’s most important buildings, such as the Olympic Theatre and the Palladian Basilica.

“We are honoured to have brought Dalí to Vicenza, in the year that marks the thirtieth anniversary of the death of the Catalan genius, by exhibiting the works of the Dalí Universe Collection” states Beniamino Levi.

In this regard, Mr. Levi adds: “We are certain that the presence in Vicenza of the Dalinian universe offers the city a unique and spectacular charm, thanks to the opportunity of admiring, simultaneously and in the same historical and artistic context, the products of Renaissance art and of Surrealism” .

Perhaps Dalí, thinking of his beloved Vicenza, would have announced: “At last I am going to be born!” “Let me be the first fore-precursor of that Renaissance!”