“Saint George and the dragon”: icon of Dalinian dualism.

The theme of Saint George and the dragon has been illustrated by many artists during the course of the history of art, from Giotto to Raphael, from Paolo Uccello to Dalí.

The Catalan artist depicted the scene of Saint George using different art forms during the course of his artistic production, we shall mention his 1942 painting entitled “Saint George” and the etching “Saint George and the dragon” (1947) where Raphael’s influence is evident. 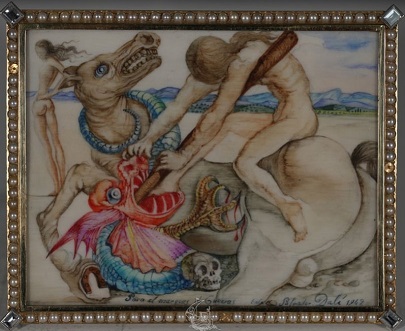 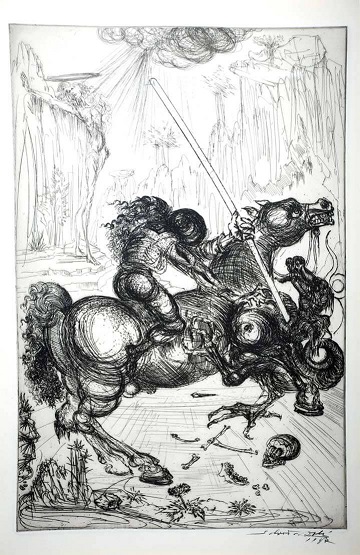 In the sculpture “Saint George and the dragon”, Salvador Dalí has transformed the traditional iconography of Saint George, martyr-horseman who, reaching the vicinity of Selene, frees the Princess from the dragon, in a symbolic and interpretative work. The Saint, without a halo, is the gallant horseman in shining armour, portrayed at the moment of his triumph over evil, as he inflicts the mortal blow to the dragon. 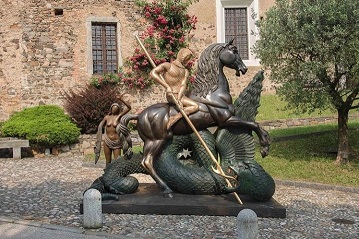 For Dalí, Raphael was “the very genius of the Renaissance”. In his autobiography “The secret life of Salvador Dalí”, Dalí declared: “If I look toward the past, beings like Raphael appear to me as true gods; I am perhaps the only one today to know why it will henceforth be impossible even remotely to approximate the splendors of Raphaelesque forms”. 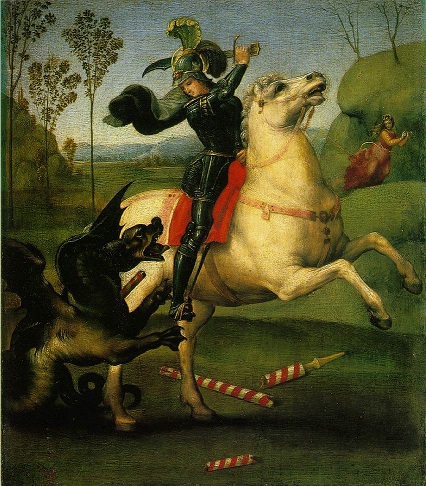 Both works illustrate Saint George riding a horse wearing shining armour, at the moment he is about to finish the dragon; the one with a sword blow, the other with a lance. Both in the painting and in the sculpture, the scene is based along the diagonal. The rearing position of the horses, that of the dragons with their tails bent in a spiral and the wings pointing upwards, enhance the dynamism of the portrayal.

In Dalí’s work the compositional balance and the presence of ideal diagonals accentuates the duality between good and evil. The thin lance that Saint George clasps in his hand creates a diagonal whose origin is the head of the dragon and rises to the arm of the knight and ideally up to the raised one of the Princess of Selene. The wings of the dragon, on the other hand, generate an opposing diagonal and form a wedge with maximum opening corresponding to the head of the dragon. These aspects highlight the importance that Dalí attributed to perspective, to mathematics, to aesthetics and to the composition.

Numerous metamorphoses participate in the sculptural scene, enriching it with symbolism. The faces of Saint George and of the Princess are without exterior details, the wings of the dragon change into flames and its tongue takes the form of a crutch, one of Dalí’s favourite symbolic elements. 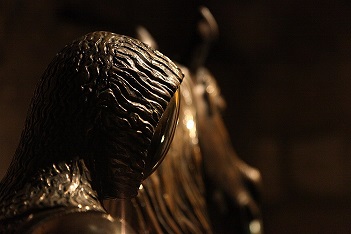 In this sculpture, Dalí symbolically illustrated the duality between life and death, between the forces of good and evil. The expression on the face of the horse, whose dominant force ideally breaks the diagonal that separates good from the evil, generated by the inflamed wings of the dragon, seems to be without terror and it does not seek a way out; on the contrary, it seems to obtain a particular energy and awareness from these flames of its own force that it transmits to its knight, in a perfect compositional harmony.

The warhorse participates actively in the struggle against evil and transmits to Saint George the courage to overcome his turbulent fears, to defeat the dragon and with it all the obsessions and temptations inherent in human nature. Only through the symbolic death of the dragon is it possible to reacquire a new balance, a new life. “Death and resurrection, revolution and renaissance – these are the Dalinian myths of my tradition” said Dalí.

It is interesting to concentrate on the metamorphosis of the dragon’s tongue into a crutch. For Dalí, the crutch is “the symbol of death and the symbol of resurrection”. 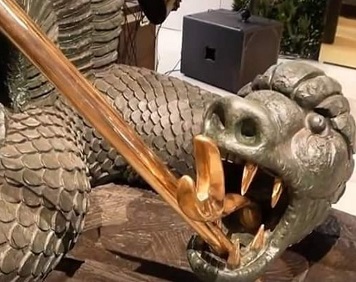 The Catalan genius saw a crutch for the first time in an attic in the country home La tour du moulin while he was a guest of the Pichot family and considered it: “untoward and prodigiously striking […] The superb crutch! Already it appeared to me as the object possessing the height of authority and solemnity”.

In the sculpture “Saint George and the dragon”, the two-forked tongue of the dragon, the lance and the knight’s clothes are shiny. For Dalí: “Glory is a shiny, pointed, cutting thing, like an open pair of scissors”. 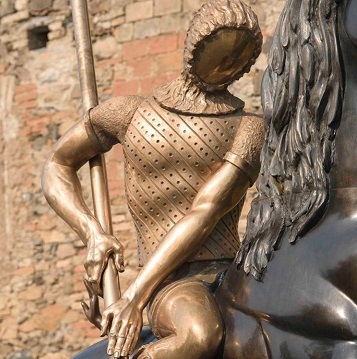 The position of the dragon’s head and the opening of its mouth remind of the Paolo Uccello painting “Saint George and the Dragon” (c. 1460), while the rearing position of the horse is undoubtedly influenced by the works of Leonardo da Vinci and has similarities with Paolo Uccello’s paintings, particularly “The battle of San Romano”. Dalí had studied the anatomy of the horse in the drawings of Leonardo da Vinci and knew the works of Paolo Uccello, of which he admired the “a grace and mystery worthy…” of the Florentine painter in illustrating the subjects of his paintings. 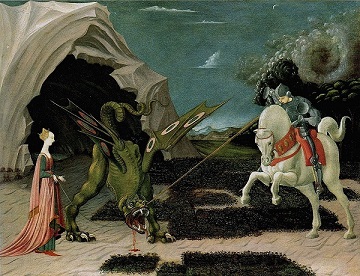 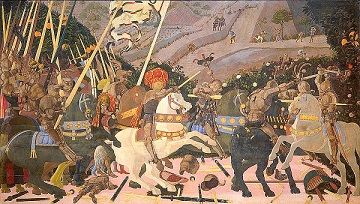 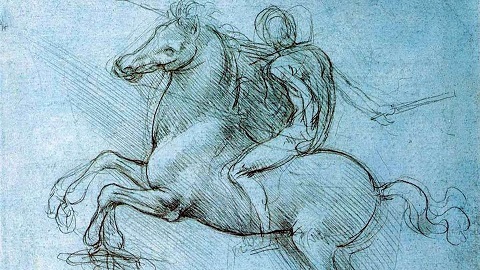 Another detail of sculpture “Saint George and the dragon” that has symbolic meanings is the detail of the dragon’s skin. It is illustrated like that of a fish and the numerous scales along the body of the mythological beast can be counted. Dalí had a particular obsession for the fish and in his “Diary of a genius” he mentioned a strange episode in which he used “glittering scales of my flying fish” to give the canvas sheen, thus attracting a swarm of large winged flies to himself, allured by the smell of the fish and by the liquid from a bottle of fixing agent that had spilled onto the artist, who, soaked and covered with flies, suddenly stopped painting and, closing his eyes, thought: “My God, I’m turning into a fish! […] I was covered with shimmering scales!”. In reality it was the dried droplets of the crystal fixing agent he had spilled on himself. Even the maid, on seeing Dalí at work in this situation, said: “You’re as wet as a fish! And I don’t understand how you can paint with all those flies torturing you!”. 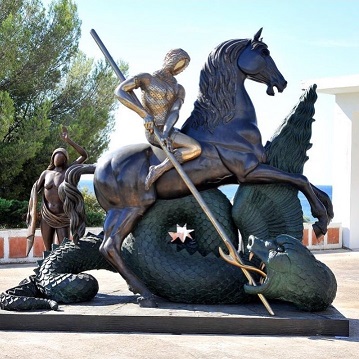 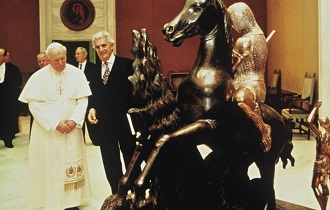 The sculpture “Saint George and the dragon” brings to light another aspect of Dalí’s life: his relationship with Faith. “While waiting for the faith that is the grace of God, I have become a hero” said Dalí.

The childhood of the Catalan artist is marked by a troubled feeling with Catholicism, his mother Felipa Domènech Ferrés was a fervent catholic, while his father Salvador Dalí y Cusí was an atheist. Dalí learned from the atheist books of his father’s library “God does not exist”. His first teacher, Don Esteban Trayter, repeated to Dalí for a whole year that God did not exist, by saying “that religion was a woman’s business”.

It was Nietzsche who opened to Dalí the door to Faith, along with his maternal example, causing the first mystical questions and doubts to be raised in the artist, which would find their glory in 1951, with the publication in his “Mystic Manifesto”. “Nietzsche awoke in me the idea of God”  wrote Dalí in his autobiography “The Secret Life of Salvador Dalì”.

Dalí obtained the bases to found his new religion from the readings of the French Philosopher Auguste Comte, offering the surrealist group “an idea or an image that was completely opposed to the Surrealist fashion”. Dalí said: “At the very moment when Breton did not want to hear any more about religion, I was preparing, of course, to invent a new religion which would be at once sadistic, masochistic, and paranoiac”.

Dalí proclaimed the need to bring mystic and religious content inside the surrealist group, and said: “I admit that at that period I already anticipated that we would return to the truth of the Apostolic Roman Catholic religion, which was slowly beginning to overwhelm me with its glory”.

A when Dalí announced: “I am surrealism”, he added: “And I believe it, because I am the only one who is carrying it on. I have repudiated nothing; on the contrary, I have reaffirmed, sublimated, hierarchised, rationalised, dematerialised, spiritualised everything. My present nuclear mysticism is merely the fruit, inspired by the Holy Ghost, of the demoniacal and Surrealist experiment of the first part of my life”.

The religious images fascinated and aroused the curiosity of Dalí for all his life. The sculpture “Saint George and the dragon” holds an important place in the Dalian universe and is a creation full of symbolic references and hidden meanings connected to the dualism between good and evil, life and death, earth and heaven. 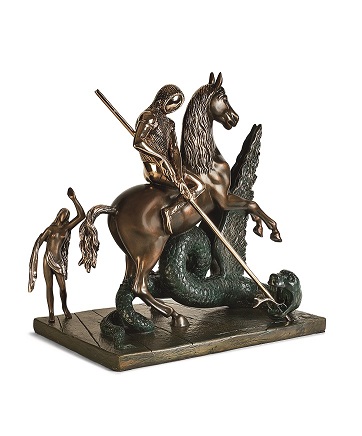 Dalí The Hard and The Soft, Robert and Nicolas Descharnes, Eccart, 2004