700th anniversary of Dante’s death. A Dalí graphic to celebrate the Italian poet.

This year we celebrate 700 years since the death of #DanteAlighieri, and the Dalí Universe will pay homage to the Italian poet through various events dedicated to the world of Dalí and Dante (#Dante700).

The first event is #LotteriaDalí (Dalí Lottery), started in December 2020, which offers the opportunity to those who purchase a special ticket for the Dalí exhibition “Dalí – The Persistence of the Opposites”, in the Italian town of Matera, to win a graphic from the Divine Comedy illustrated by Salvador Dalí, more specifically the graphic illustrating Canto XIV from the Paradise book.

Whoever purchases one of the 250 tickets can win this wonderful Dalí graphic and also visit the exhibition any day of his / her choice until the 30th of November 2021. We hope to be able to reopen the exhibition and welcome you as soon as possible.

Because of Covid-19 restrictions, we have decided to postpone the lottery, so you can purchase these tickets until the 4th of April 2021, and we will draw the winning ticket on Monday the 12th  of April 2021.

In the 1950's the Italian Government chose Dalí to create a special commemorative edition, in order to celebrate the 700th anniversary of Dante’s birth. However, when the project was announced, many Italians were unhappily surprised that a Spaniard would be illustrating their great heritage, let alone Dalí who was a provocative surrealist with a flamboyant egocentric personality. The project thus didn't proceed.

Nonetheless, Dalí continued his work and experienced his own personal journey through Dante's realm, a journey that would last nine years. From 1951 to 1960 he created the incredible number of 100 stunning watercolours; 34 for Inferno (Hell), 33 for Purgatorio (Purgatory) and 33 for Paradiso (Heaven). These watercolours were later printed in a xylographic edition. Known for exploring the unconscious, his interpretation of dreams, his fear of death and sexuality, Dalí was perfect for the task. He interprets Dante’s rhythmical verses, his elaborate characters and bizarre punishments wonderfully. The supernatural blends with spirituality, and Dalí adds his personal touches; melting figures, crutches, angels and contorted bodies, creating this unique version of the Divine Comedy.

The result is an intense dialogue between two artistic geniuses, encompassing the subjects of life, death, art and religion, which will fascinate and surprise. 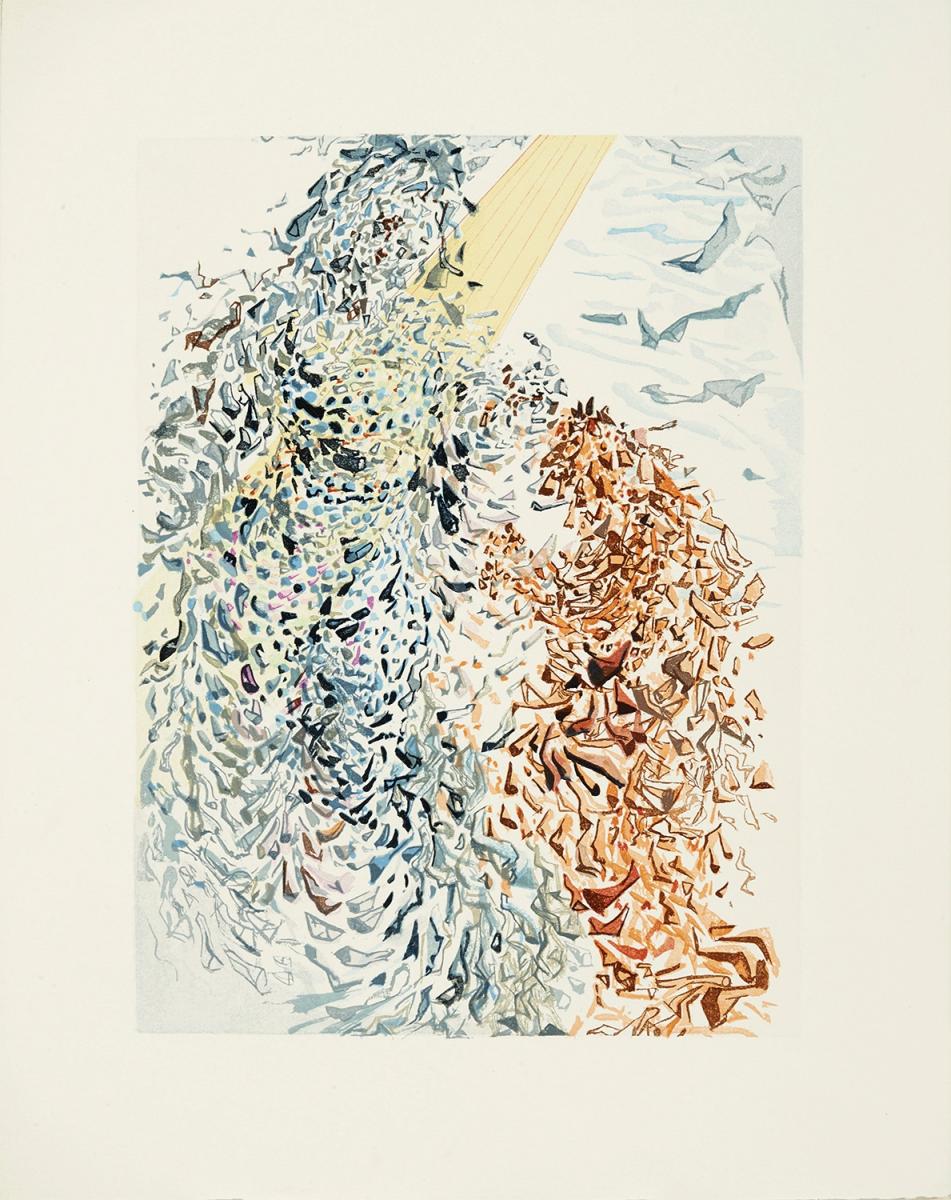 Canto XIV from the Paradise book, The Divine Comedy, illustrated by Salvador Dalí

In the Canto XIV of Paradise, Dalí illustrates Dante´s passage to the 5th Sphere of Mars, guided by Beatrice as described by Dante Alighieri in the Divine Comedy. Dante and Beatrice are in the centre of the scene, while at the top a ray of light represents the splendour of the Holy Spirit.

In the Dante´s Canto, Beatrice feels a doubt of Dante´s: the poet asks if the light that sparks from the blessed of Paradise will remain once, after the Last Judgement, they will re-join their flesh and if their sight will suffer from such brightness.

Getting to the 5th Sphere, Dante sees two streams of light forming a cross and describes his vision of Christ. Along these streams the lights of the blessed shine when they meet and cross each other like particles of dust in sunrays. 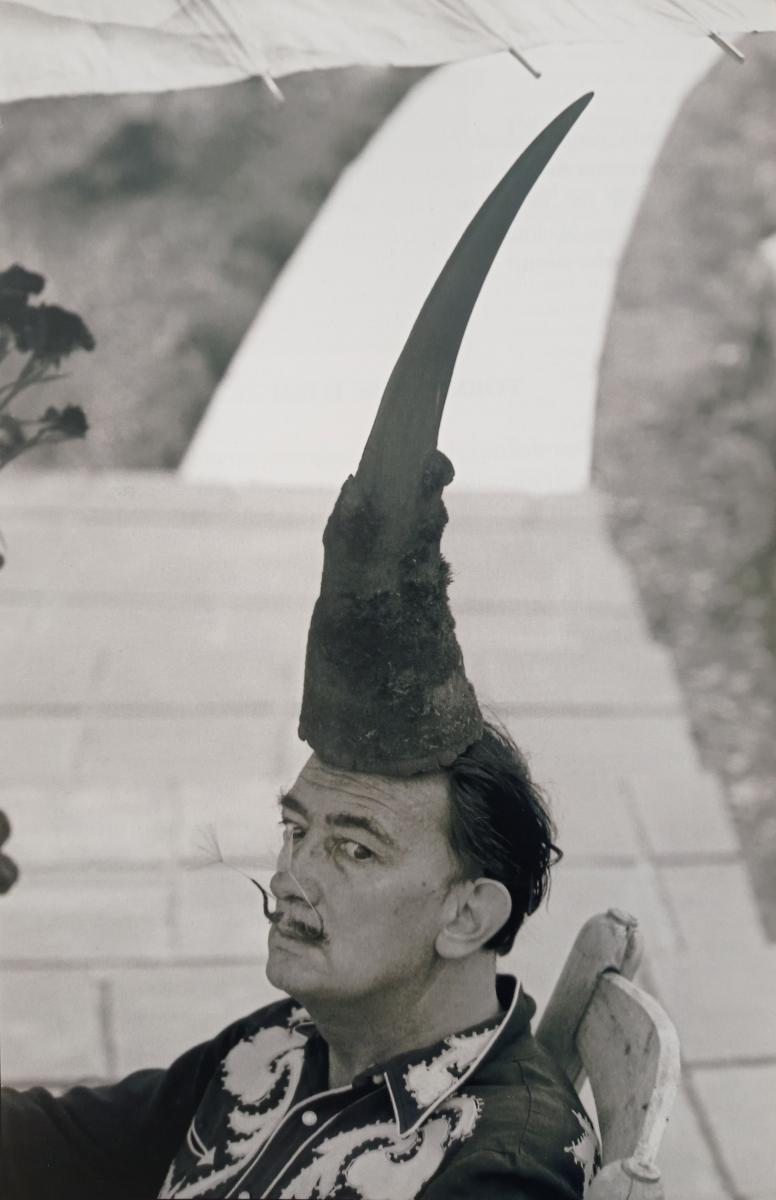 The Catalan artist uses one of his preferred image, the rhino´s horn, to illustrate the vision of the supreme Poet. Dante and Beatrice lose their human appearance, and acquire that of particles horn-shaped in logarithmic curves.

In his “Diary of a genius” Dalí wrote: “All curved surfaces of the human body have the same geometric point in common: the one found in this cone with the rounded tip curved towards heaven or towards the earth, and with the angelic inspiration of destruction in absolute perfection – the rhinoceros horn!”.

From top to bottom, the scene shows infinite small rhino horns, which for Dalí represent “the essential base of any aesthetics”. Their position recalls the one assumed by the particles of the atmospheric dust and draws the shapes of Beatrice and Dante.

Dalí could not choose a more divine and perfect form to illustrate the beauty of Beatrice while she guides Dante to the 5th Sphere. In the end it is the same form, divine and perfect, that he chose to represent Gala in his painting of 1952 “Assumpta Corpuscularia Lapislazulina”. 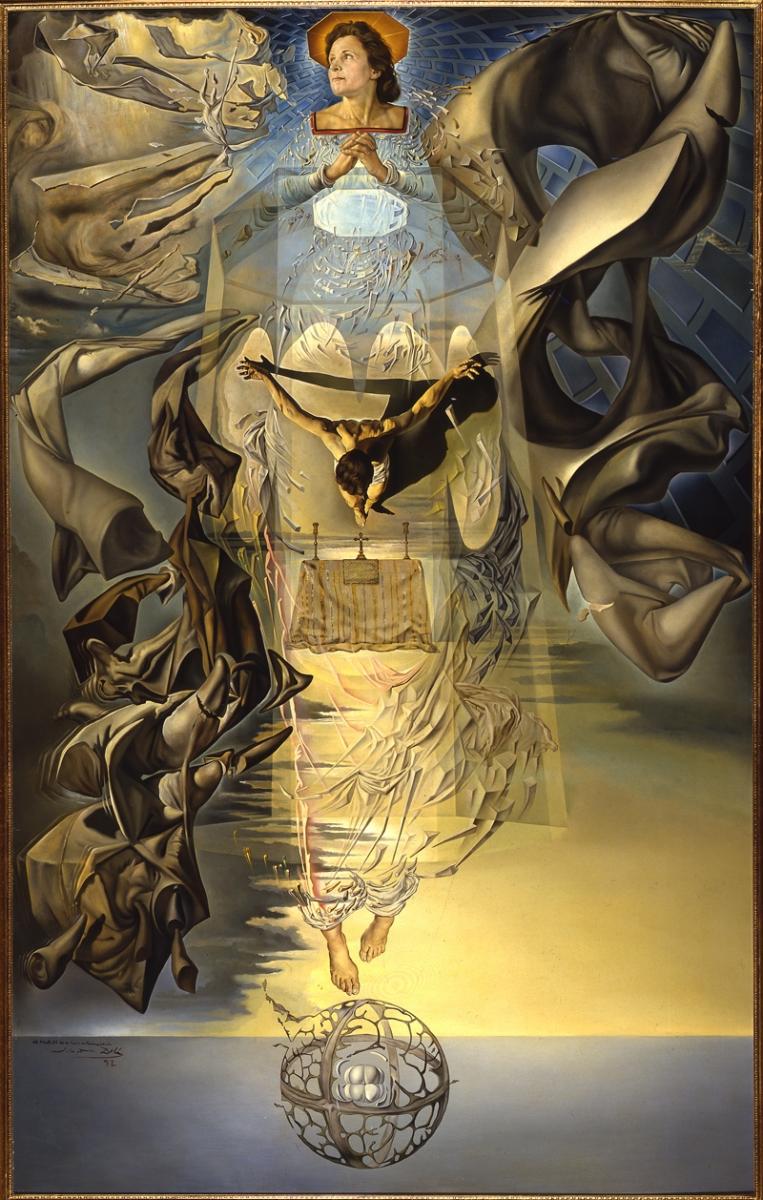 From rim to center, center out to rim,

so does the water move in a round vessel,

What I am saying fell most suddenly

into my mind, as soon as Thomas’s

between his speech and that of Beatrice,

a similarity was born. And she,

when he was done, was pleased to start with this:

“He does not tell you of it—not with speech

nor in his thoughts as yet—but this man needs

to reach the root of still another truth.

Do tell him if that light with which your soul

blossoms will stay with you eternally

even as it is now; and if it stays,

do tell him how, when you are once again

made visible, it will be possible

for you to see such light and not be harmed.”

As dancers in a ring, when drawn and driven

by greater gladness, lift at times their voices

and dance their dance with more exuberance,

so, when they heard that prompt, devout request,

in wheeling dance and in amazing song.

Whoever weeps because on earth we die

that we may live on high, has never seen

eternal showers that bring refreshment there.

That One and Two and Three who ever lives

and ever reigns in Three and Two and One,

was sung three times by each and all those souls

with such a melody that it would be

appropriate reward for every merit.

And I could hear within the smaller circle’s

much like the angel’s voice in speech to Mary)

reply: “As long as the festivity

of Paradise shall be, so long shall our

love radiate around us such a garment.

Its brightness takes its measure from our ardor,

our ardor from our vision, which is measured

by what grace each receives beyond his merit.

When, glorified and sanctified, the flesh

is once again our dress, our persons shall,

in being all complete, please all the more;

the Highest Good gives us will be enhanced—

the light that will allow us to see Him;

that light will cause our vision to increase,

the ardor vision kindles to increase,

the brightness born of ardor to increase.

Yet even as a coal engenders flame,

but with intenser glow outshines it, so

that in that flame the coal persists, it shows,

so will the brightness that envelops us

be then surpassed in visibility

by reborn flesh, which earth now covers up.

Nor will we tire when faced with such bright light,

for then the body’s organs will have force

enough for all in which we can delight.”

One and the other choir seemed to me

so quick and keen to say “Amen” that they

showed clearly how they longed for their dead bodies—

not only for themselves, perhaps, but for

their mothers, fathers, and for others dear

to them before they were eternal flames.

And—look!—beyond the light already there,

an added luster rose around those rings,

even as a horizon brightening.

And even as, at the approach of evening,

new lights begin to show along the sky,

so that the sight seems and does not seem real,

it seemed to me that I began to see

new spirits there, forming a ring beyond

the choirs with their two circumferences.

O the true sparkling of the Holy Ghost—

how rapid and how radiant before

my eyes that, overcome, could not sustain it!

But, smiling, Beatrice then showed to me

such loveliness—it must be left among

the visions that take flight from memory.

From this my eyes regained the strength to look

above again; I saw myself translated

to higher blessedness, alone with my

lady; and I was sure that I had risen

because the smiling star was red as fire—

beyond the customary red of Mars.

With all my heart and in that language which

is one for all, for this new grace I gave

to God my holocaust, appropriate.

Though in my breast that burning sacrifice

was not completed yet, I was aware

that it had been accepted and auspicious;

for splendors, in two rays, appeared to me,

so radiant and fiery that I said:

“O Helios, you who adorn them thus!”

As, graced with lesser and with larger lights

between the poles of the world, the Galaxy

gleams so that even sages are perplexed;

so, constellated in the depth of Mars,

a circle’s quadrants form where they are joined.

And here my memory defeats my wit:

Christ’s flaming from that cross was such that I

can find no fit similitude for it.

But he who takes his cross and follows Christ

will pardon me again for my omission—

my seeing Christ flash forth undid my force.

Lights moved along that cross from horn to horn

and from the summit to the base, and as

they met and passed, they sparkled, radiant:

so, straight and slant and quick and slow, one sees

on earth the particles of bodies, long

and short, in shifting shapes, that move along

the ray of light that sometimes streaks across

the shade that men devise with skill and art

to serve as their defense against the sun.

And just as harp and viol, whose many chords

although each single note is not distinct,

so, from the lights that then appeared to me,

out from that cross there spread a melody

that held me rapt, although I could not tell

what hymn it was. I knew it sang high praise,

since I heard “Rise” and “Conquer,” but I was

as one who hears but cannot seize the sense.

Yet I was so enchanted by the sound

that until then no thing had ever bound

me with such gentle bonds. My words may seem

presumptuous, as though I dared to deem

a lesser thing the lovely eyes that bring

to my desire, as it gazes, peace.

But he who notes that, in ascent, her eyes—

that I had not yet turned to them in Mars,

can then excuse me—just as I accuse

myself, thus to excuse myself—and see

that I speak truly: here her holy beauty

is not denied—ascent makes it more perfect. Canto XIV from the Paradise book, The Divine Comedy, illustrated by Salvador Dalí.

Dante Alighieri by Giotto di Bordone, c. 1335, Detail from a fresco in the Podestà Chapel in the Palazzo del Bargello, Florence, Italy.